Come March and the people across the length and breadth of the country, gear up to celebrate Holi, the most colorful and exciting of all the festivals. The festival is celebrated with great zeal and excitement and people have great fun while spreading color and water in the air and consuming various types of foods and drinks. We all are well aware of the unique celebrations that take place in different parts of the country on the occasion of Holi; so why don’t we pack and visit the lavish celebration that happens in different cities. Thatslyf loves to play your guide in this endeavor. Read through:

Famous for the celebration of Lathmar Holi, Barsana tops the list of must visit places for Holi celebration. The celebrations commence one week before the actual festival, with the women of Barsana beating the men from Nandgaon, using sticks or lathis and the men try to protect themselves with shields. Countless visitors come to Brasana to watch this tradition which provides the women an opportunity to take up the arms against men and get appreciated and applauded for the same. 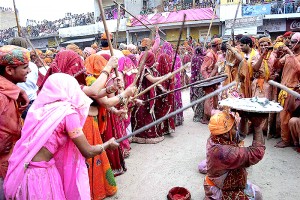 In the holy towns of Mathura and Vrindavan, Holi celebrations start more than a month before the actual festival. Here the colors can be seen flying everywhere in the air and it becomes hard to recognize anyone as the people are immersed in multiple hues from head to toe. On the actual day of Holi, a colourful procession is taken out in Mathura that commences from the Vishram Ghat and ends at the Holi Gate. And for people who want to have the real taste of traditional holi, the sight of priests preparing the famous Bhang in the morning is simply irresistible. Shantiniketan, which is famous as the abode of noted writer and philosopher, Shri Rabindra Nath Tagore, celebrates holi as Vasant Utsav. The celebrations that were initiated by Gurudev himself, are inspired by the colors of holi as well as the arrival of spring season. The students of Shantiniketan dress up in the colors of spring and present a great cultural program for visitors and this is followed by the usual tradition of throwing colors on everyone present.

These festivities, which are slightly less frivolous in nature as compared to the ones in other parts of the country, are held one day prior to the actual day of Holi celebration.

The annual fair of Hola Mohalla, held at Anandpur Sahib, has been the most prominent way of celebrating Holi within the Sikh community since as early as 1701. These celebrations, initiated by Guru Gobind Singh Ji, are unique as rather than playing with colors, the participants put up a display of physical agility. For people who enjoy action, watching the various Sikh warriors proving their worth in the matches of wrestling, martial arts, mock sword fights, acrobatic military exercises, and turban tying is a real treat.

In general the Holi celebration in South India is quite subdued and restricted to performance of religious rites and temple festivities. However, Hampi proves to be an exception as the people come out in large numbers to play with colors amidst the beating of drums and dance performances. The ancient ruins of the Vijayanagar Empire are smeared with the different colors, expressing the joy and happiness of the people of the city. 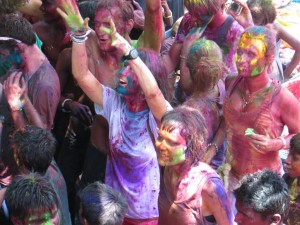 Known for its grand palaces and aristocratic lifestyle, the romantic city of Udaipur celebrates the color of festival with grace and elegance. On the eve of Holi, the royal family of Mewar organizes a grand procession that commences from the royal abode to end at Manek Chowk. The procession features bedecked horses and the royal band. Later the family lights the traditional bonfire to ward off evil. This is how the people around you are celebrating the Holi festivities. So, instead of simply playing Holi at your home with your near and dear ones, take them out and play the Holi in a different land in a different fashion. Thatslyf wishes its readers a very colorful and joyful Holi. Stay colorful and vibrating.. coz thatslyf!