Welcome back to FYI dear reader. It’s a common mistake that we do thanks to our teachers who themselves had any idea how to pronounce a certain word correctly. Agreed that our lingo differs from the Britons and Americans but it shouldn’t kill the essence of the word. For instance the word Pronounce itself is enunciated wrongly most of the time. It is “Pro-nun-ce” and not “Pro-noun-ce” as you have been saying it your whole life. 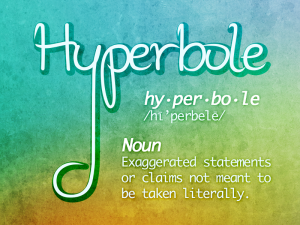 Here is an attempt from us to help you pronounce the words as they ought to be and save you from embarrassment.
Hyperbole-
Mispronounced as: Hyper- bowl
Correct Pronunciation: Hyper-balee
Meaning: statements exaggerated to such an extent that it is not meant to be taken literally.
Use: “It’s been ages since I last saw you” or “She has grown as old as hills”. Such statements might be a hyperbole because you might have met the person only a few months back and not ages literally nor a person can be as old as a hill.

Look into this space tomorrow for more such words and updates and Stay addicted to thatslyf.