Dowry: An Evil that Lives

Stop. Don’t read further, because this article doesn’t have to do anything with you. For what you may read, you may not accept. For what you may accept, you may not like. Dowry yet again. There are hundreds of people speaking about this. What’s new? Another pedagogical message that dowry is bad, dowry is an evil, chuck it, don’t take it. Because Dowry doesn’t involve you. Does it? Its for the uneducated masses. You don’t take dowry. You are educated. You know it is an evil. Yes, this critique advocates against dowry: an evil that lives. This critique is for people who think are educated enough, but are fundamentally educated illiterates. Read at your own risk.. 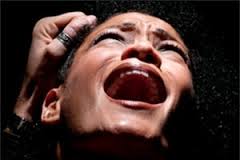 Marriages are made in heaven, yet not all end up heavenly. While marrying their daughters off to a new family, the bride’s parents take a sigh of relief. But is it over with that? Soon a new chapter begins in the girl’s life: Dowry. India has been seeing a massive rise in the number of dowry harassment cases being reported per year. In 2011 the number of arrests was a little less than one lac, which grew to 1.97lacs in 2013. Amid these, remain several cases which go unreported.

It is sad indeed, but dowry is an evil that has camouflaged itself in so many forms, that it has become tough to uproot it. Rituals, customs, practices or whatever you may wish to call it, this evil shall live long and this is the harsh reality. Dowry is a threat to the society which has been looming since long. It has only changed its forms and names. It is plain blackmailing wrapped in a pretty avatar. 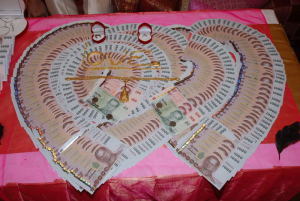 In once a largely male dominated society, where the legal heirs to the property was always the son and never a daughter, the custom of gifting jewelry and other monetary benefits was started as a token from the girl’s parents to their daughter as a proof of her share in their property. Soon, this changed its color from the basic necessities to the luxuries. People, who could afford to give their daughters more, gave her cars, refrigerators etc.

We humans are such animals that though we have eyes but are short sighted. Science calls it myopia- where a person cannot see what is kept at a distance. This myopic vision of ours’ has led to our own fall. The run for the biggest and best weddings led to the Groom’s family turning into Vampires who suck money, and if they don’t get it, they wouldn’t mind sucking blood too. This may not find true with all, but dowry is such a parasite that is feeding on us gradually. Delhi Tihar jail is brimming with women accused of harassing women for dowry. According to sources, one out of every five women in Tihar jail is accused of Dowry harassment. 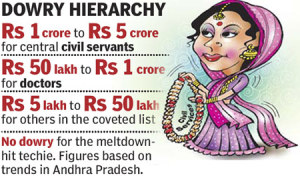 Dowry brings both marital disagreements as well as social and mental pressure. We see people wishing for a boy as a new born baby, which would later fetch them monetary results. This is the reason the Girl’s parents feel cursed. The rate of female infanticide has increased leading to a very alarming sex ratio of 940 girls for every 1000 boys according to census 2011. In the name of giving a foothold or a monetary backup to the girl this dowry metamorphosed into heavy gifting from jewelry “Yeh Aapki ladki hi pehenegi” to cars “Isme to aapki ladki hi ghoome gi” 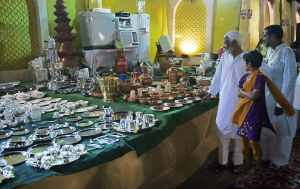 Our Indian way of thinking is governed more by customs, and paradigms which are the root cause of this unending menace. But why even after all these years Dowry is not vanishing? Even after girls becoming independent and equally educated as boys, why the sun does not set for dowry?

The answer is simple. It’s our dual personalities towards the evil. Every form of peril or threat one can overcome if we unite in our endeavor to uproot it. Why ‘Sati Pratha’ come to an end? It’s because all without exception stood for the rights of a person’s life. But alas, dowry has always won because it divides and rules. 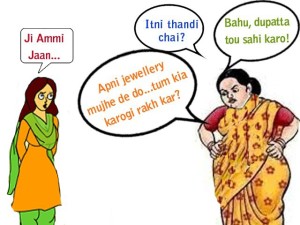 Our society looks at the girls in two different ways. There is the daughter (beti) and there is a daughter in law (bahu). The beti deserves all the happiness in the world but the bahu is the source of income. The same family, which has worries of giving dowry to their son in law’s family has no qualms in handing over a list of items to the bahu’s family stating “Ji, aap jo denge apni beti aur dammad ko denge, Hume kuch nhi chahiye”. The same Groom’s family while marrying their daughter has a different perspective. It is paradoxical that we hate this evil as much as we also like this evil.

We live in a tight knit society and even slightly budging from the said customs is said to bring ‘Anhoni’ (misfortune). This mentality of partiality between the ‘bahu and beti’ has to end before Dowry dies its natural death. The groom must educate the parents if need be about the ugliness of this system. What is education if we cannot rise above and take the high road? What good an MBA, or an engineer or a Doctor you are if greed within you is bigger than love. Don’t be afraid to be the change. Don’t think it as ‘Pratha hai, todd nahi sakte’(it is our custom, which cannot be bypassed). 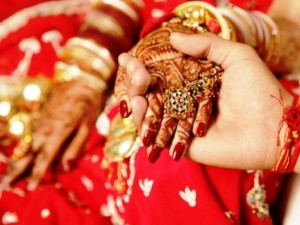 Change, but only for the better. Prevent this ill treatment of the bride, and the humiliation of the bride’s family. The girl and her family equally deserve social and psychological respect, rather more. Marry a girl not her wealth. Marry her for her love, not for her dowry; coz money will erode one day, but love shall not, coz thatslyf..!!